Yes, men CAN get breast cancer.

I read a powerful story about Bret Miller who was diagnosed with breast cancer at the age of 24! According to a Women’s Health article Bret was 17 when he first noticed the lump in his breast. His parents and doctors thought it would go away, thinking it was a calcium buildup brought on by puberty. Just before heading to college he brought it up again during a physical. And again the Dr. dismissed it. While finishing up college a few years later he noticed soreness and a yellow-orange discharge when he squeezed his nipple. As most men do, he ignored it and didn’t go to the Dr. Finally once he secured health insurance at his new job, Bret went for an appointment. The Dr he saw this time around took the lump seriously and suggested an ultrasound/mammogram. This is when he found out he had breast cancer. 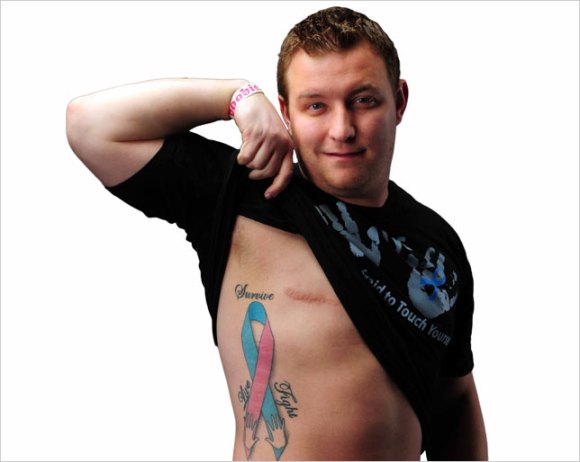 He found a surgeon who had experience performing mastectomies on men and initially suggested a double mastectomy. Bret pushed for a unilateral mastectomy (only removing tissue from the affected breast) instead and his doctor agreed after making a few phone calls to other experts. Then, his insurance company canceled the first surgery. Not many male mastectomies probably go pass their desks, notes Bret. They pushed back, and luckily, the insurance company cleared it. In May 2010, he had his right breast removed, followed by four rounds of chemo. On September 21, he had his last round of chemo, and his oncologist gave him the all clear. He’s been cancer-free ever since.

Although it is rare, less than 1% of all breast cancers occur in men. According to Breast Cancer.org in 2015, about 2,350 men are expected to be diagnosed with the disease.

Here is the truth about men and breast cancer. Boys and girls, men and women all have breast tissue.

Boys’ and men’s bodies normally don’t make much of the breast-stimulating hormones that girls and women stimulate that turn into full breasts. . As a result, their breast tissue usually stays flat and small. Still, you may have seen boys and men with medium-sized or big breasts (man boobs). Usually these breasts are just mounds of fat. But sometimes men can develop real breast gland tissue because they take certain medicines or have abnormal hormone levels.

There are a number of factors that can increase a mans risk of getting breast cancer including:

Here are some of the symptoms of male breast cancer

So guys if you notice any chances in your chest/breast please contact your doctor, if they don’t give you any answers go for a second and third opinion.. As with female breast cancer early diagnosis could make a life-saving difference. Please do your research and learn more at Breastcancer.org and The American Cancer Society

Check out Bret’s foundation CheckThem.org to find out more about breast cancer in men and what you can do to fight for a cure.