Twins run in my family.

When I looked at the sonogram screen I was not expecting to see two little blips. One floating ever so gently (Leah Twin A) and the other ‘jumping’ up and down (Myles Twin B). I even asked the technician NOT to tell me that I was having twins. So she didn’t 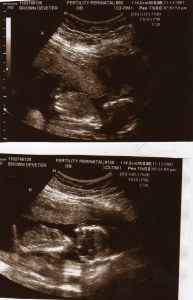 , instead she called my wonderful husband and 3 year old son into the room; congratulated them and told them we would go from a family of three to a family of five! My beautiful husband said cool! See I was sick the ENTIRE time. From the moment I realized we were pregnant I was SICK. Not morning sickness, ALL DAY sickness. Couldn’t eat, couldn’t drink ugh it was awful! So hearing that we were having twins was an answer for him, to the question “why are you so sick”. I on the other hand, I sat in a daze for about two weeks. Yes, I was in a daze for two weeks. Me with twins? How did that happen???

Twins run in my family.

My maternal grandfather was a triplet, my maternal grandmother gave birth to two sets of twins (one set passed away at birth), I have two sets of cousins (1st and 2nd cousins) that are twins. But us having twins was the furthest thing from my mind. We’ve all heard the myths about multiple births, twinning skips a generation,

Here is the kicker, multiple births has NOTHING to do with genetics (running in the family), it’s all about hyper-ovulation.

Hype-ovulation occurs when a woman’s ovaries release more than one egg during each cycle. This can increase the chance of fraternal twins, triplets or more. It’s possible for hyper-ovulation to happen in just one ovary, or involve the release of more than one egg from each ovary.

If a woman inherits a certain gene that causes her to hyper-ovulate, her chance of having fraternal twins — which are produced from two separate eggs — increases. And since that gene is, well, genetic, parents may also pass it on to their kids, making it possible for twins to run in the family (and perhaps even for twins to have their own little sets of twins). However, there’s no known gene linked to identical twins — which results when one egg splits in half — so this twin type isn’t hereditary.

So there you have it… the only genetic connection in multiple births is hyper-ovulation and that only occurs in fraternal twins. So if you are one of the MILLIONS of people who are always talking about your desire to have twins…. think about your body and all the intricacies of pregnancy and be thankful that you can even conceive before making all these demands. Enjoy the journey to motherhood.