I was doing some research on monthly awareness’ and came across a few that made me raise an eyebrow. Like…Correct Posture Month (May) and Tickling Month (July) there are many that I looked at and laughed but one in October stood out to me, it’s called Selective Mustism Awareness month. Now just by reading the name of it I knew that it had something to do with not wanting or being able to speak.

If you know me you know I always have to find answers to my questions. I don’t let sleeping dogs lie (love that idiom). So I went on a search for information. According to SelectiveMutism.org Selective mutism (SM), formerly called elective mutism, is defined as a disorder of childhood characterized by an inability to speak in certain settings (e.g. at school, in public places) despite speaking in other settings (e.g. at home with family). SM is associated with anxiety and may be an extreme form of social phobia according to researchers and clinicians who are familiar with the disorder (Black & Uhde, 1995; Dow et al., 1995, Dummit et al., 1997, Kristensen, 2001; Leonard & Dow, 1995). 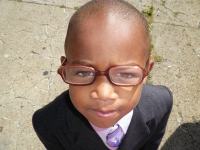 Now let me tell you why this was interesting to me. My son Myles doesn’t like to speak to people in certain situations just like it’s described above. When he is home or in comfortable surroundings he doesn’t have a problem speaking (unless he’s told to apologize or say hello to someone in the house) but in public settings like church or the playground if he’s told to speak to people he doesn’t really know, he freezes. One Sunday when walking into church everyone spoke to the greeter except Myles. I don’t know about other cultures but as Black American’s it’s seen as rude when children don’t speak when spoken to. I was raised this way and we are raising our children the same way. Speak when spoken too. With Myles it is really a struggle. When I asked him why he didn’t speak he said “I’m scared of people”. Before reading about selective mutism I told him that he was being rude and I don’t like that. I tried to get him to speak but he just wouldn’t part his lips. I cannot and will not diagnosis my baby with this syndrome; but as an educated mother I think it is my responsible to do my research and ask his Dr. to see if we might have to handle this issue with Myles.
I’d rather know for sure then risk his happiness and success for the future. He’s not in school right now but I’m curious to see if he grows out of this shyness or not.

Check out the video below and facebook page that talks more about SM. I will keep you posted on my boy.

I was the same way as a kid. Very shy when speaking to adults and when meeting new kids. Still am, to some extent, to be honest. If he's speaking at home and with adults he knows, I wouldn't worry about it. Just encourage him to be polite (he doesn't have to speak, but at least smile if he feels like it) and let people know that he is shy and slow to warm up to people. Be patient and encouraging.