I know I haven’t posted in a minute but this issue has bought me out of my slump and I need to get it off my chest!

This post isn’t a vs. regarding their singing ability but their personal lives; specifically their husband ‘stealing’ ways. Now let me first say that I don’t think anyone can be ‘stolen’ unless you are taken from your home by force! One woman cannot steal another woman’s man; homeboy just left! The other woman may have encouraged his straying but a big old man can’t be stolen by a woman. That aside let me ask a question. 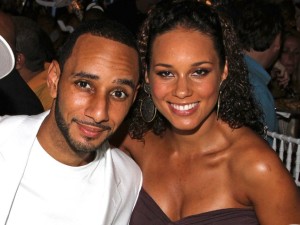 Am I the only one that thinks there is a double standard happening here in the case of Alicia Keys/Swiss Beatz and Fantasia Barrino/Antwaun Cook? I mean both of these men were married when dealing with these famous songstress but Fantasia is being made out to be a “Husband Stealing Hoe” while Alicia is seen as having a “secret romance” in my mind this is a double standard in tone and attitude!

Now let me preface my argument by saying BOTH Alicia and Fantasia were dead wrong for getting involved with married men. As the product of such a relationship I detest any woman who lowers herself to the point of being an adulterer especially those doing so knowingly! It’s wrong not only because I say so or because society frowns upon it but because THE BIBLE says so. Period.

Ok I got that out…. now listen to me

There were pictures all over the web with them showing public displays of affection and then the reports of Ms Keys being with child…. impregnated by a MARRIED man. The ink was not dried on his divorce papers from Mashonda before he married Ms Keys and went on a romp with Queen Latifia and her ‘trainer’ somewhere in France.

Fantasia the dark skinned, formally illiterate teen mother has been shed in a rather dispelling light and even attempted to take her life. Ms Keys the light skinned, honorary AKA, ultra talented multi Grammy award winner has been on tour, sang at awards ceremonies and has been living the life of Reily (not sure what that means but my Grandmother says it all the time) is STILL America’s sweetheart! Why America? Why the double standard?

Fantasia was picked as America’s Idol but yet she is the husband stealer and Alicia is only seen for the things that she has done outside of this relationship. Now I’m not an entertainment writer at all but this really bothered me. What message is this sending other women who might be considering a ‘relationship’ with a married man. It’s wrong on all levels y’all.

So here is my second question…. what really is going on here? Is this still a form of racism? Classicism?

I won't debate their actions (that horse is SOOOOOO dead to me), but this is an interesting post. I seems to me that the difference is simply in the media's perception of the “facts” and each have responded when “confronted” with accusations. AK has simply not commented, while FB has stuttered, blushed, looked uncomfortable before fumbling some type of answer. Perception is everything. If you act guilty, those around you are much quicker to deem you as such.

I agree with mrstdj! Fantasia straight up said that she didn't even know this man when she clearly had his name tattooed on her shoulder. Now what I find strange is the fact that people find it okay to peek into celebs personal lives and pass judgment. There are plenty separated people that get involved in different relationships before a divorce is final. If Mr. Cook did in fact tell her that he was separated and going thru a divorce I think she could've given him time to sort that out but you can't help who you fall in love with. I think it was smart of Alicia not to comment on it. I'm also confused as to why Nancy Grace is so concerned with this situation! You're right no one even mentions alicia or gabrielle union for that matter.

I don't think that it has anything to do with racism or classicism, I think that the media wants to keep this “angelic” image over AK and a “hood rat” image over FB. AK didn't try to kill herself over SB but did something just as stupid by getting engage and pregnant by him. What ever happen to closing one chapter first b4 opening another. You would think that the way AK portrays herself and what FB has went though in her past life, that they would have more sense and dignity than this. Both are wrong and sluts if you ask me, hate to say that, but it's the truth. I don't have sympathy nor respect for any women who purposely degrades themselves like that. I hope through all this, FB will get well and AK will, I guess, have a successful marriage.