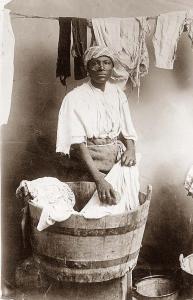 Hey Y’all:
I was at the laundromat last night (well really it was early this morning) and I realized that I love the washing machine!
As I watched the rinse and spin cycle I thought about all the women before me who had to manually wash their clothes. I thought about the time that it took them to get one load done and how many times a week they probably had to wash clothes. I thought about all the nasty diapers and underwear they had to handle and praised the person who invented the modern day washing machine!
I came into the office today and did a little research on the washing machine and read a little history about the methods people used ‘back in the day’. According to the Great Idea Finder site and About.com – people on sea voyages washed their clothes by placing the dirty laundry in a strong cloth bag, and tossing it overboard, letting the ship drag the bag for hours. Ancient peoples cleaned their clothes by pounding them on rocks or rubbing them with abrasive sands; and washing the dirt away in local streams.
“In the early days, without running water, gas, or electricity even the most simplified hand-laundry used staggering amounts of time and labor. One wash, one boiling and one rinse used about fifty gallons of water—or four hundred pounds—which had to be moved from pump or well or faucet to stove and tub, in buckets and wash boilers that might weigh as much as forty or fifty pounds. Rubbing, wringing, and lifting water-laden clothes and linens, including large articles like sheets, tablecloths, and men’s heavy work clothes, wearied women’s arms and wrists and exposed them to caustic substances.
Can you imagine this back breaking work after having to deal with kids, a significant other, work, preparing meals and everything else we do everyday? I love the inventor of the washing machine. Hamilton Smith, William Blackstone, Hurley Machine Company, F.L. Maytag, The Whirlpool Corporation and anyone else who had a hand in making my life a little bit easier; I thank you!
Until next time…
MUAH!

One reply on “The Laundry”