Welcome to my second edition of Everyday Superstar in honor of everyday people doing extraordinary things. Today I would like to spotlight a very inspirational individual 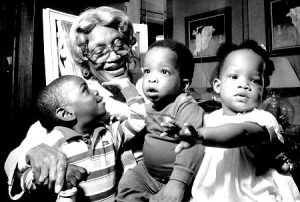 If you are native New Yorker you would have heard about Mother Hale at some point in your life. Mother Clara Hale was a day care provider turned foster mother to underprivileged children in Harlem NY. Mother Hale is inspiring to me because of my love for children and the life’s work my mother has dedicated herself to… the nurture of children that she did not birth into this world.

I remember reading a book about Mother Hale when I was in Jr. High School. She was a very loving and caring person who went beyond the call of duty when it came to children in need. Mother Hale was influential in providing homes and safety for children who were homeless and those born drug addicted. This story was so powerful and still stands out in my mind. We need more Mother Hales today, there are still so many children who are in need of her love, attention and care.

Here is a bit more about Mother Hale directly from the Hale House website:

In 1969 at the age of 64, Mother Hale was prepared to retire when one day her daughter, Lorraine, encountered a woman on a street corner having difficulty holding her baby and obviously in need of assistance. Lorraine stopped and explained to the woman that if she needed help caring for her child that Mother Hale would happily lend a hand. She gave the woman her mother’s address, and on the next day, the mother and child appeared at Mother Hale’s door.

It was evident to Mother Hale that the mother was a substance abuser; and so that baby became the first of many babies born exposed to drugs or alcohol to be nurtured by Mother Hale. Within six months she was again caring for babies in her small apartment. This marked the birth of Hale House.

A few years later, Mother Hale, with the help of her daughter and some very supportive local elected officials acquired a brownstone in Harlem. Mother Hale and the children she cared for at that time moved to their new home, which is still the site of Hale House today.

During the 1970’s, the scope of work initiated by Mother Hale increased to include many programs for at-risk children and their families. In the 1980’s, as the urban drug problem gave way to the AIDS crisis, Mother Hale responded by taking in children who had lost their parents to the disease or who were themselves born infected with HIV, the virus that causes AIDS.

Be sure to email your Everyday Superstar to deveterb@gmail.com